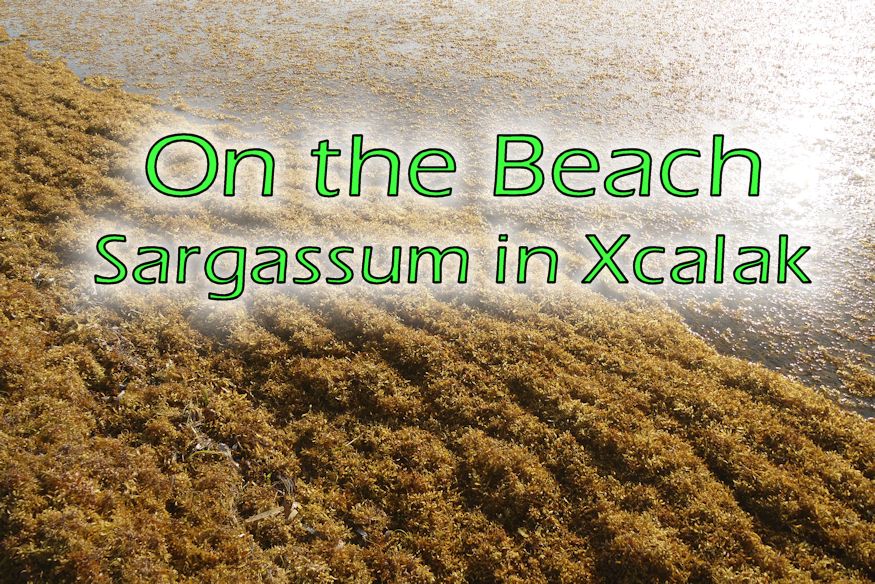 Xcalak, Mexico is a secluded beach paradise perfect for travelers who love nature. But nature isn’t beautiful all the time – sometimes it stinks.

Arriving in Xcalak you might find the beach covered with greenish-brown seaweed, called Sargassum (or as folks around here call it, Sargasso).

It’s gross. It’s smelly. And it sure doesn’t look great.

In the video below you’ll learn about the Sargassum in Xcalak, what it looks like, where it comes from, and its effects on the Caribbean coast.

At times it might seem like there’s mucho Sargassum in Xcalak. But the amount that washes over the barrier reef onto Xcalak’s shores is nothing. Not compared to the mass of seaweed floating in the Sargasso Sea.

Yes, that’s an entire sea named for this seaweed. Located in the North Atlantic Ocean, the Sea of Sargasso contains a flotilla of Sargassum nearly the size of Australia.

Ocean currents bring the seaweed from the Sargasso Sea to Xcalak. But the Sargassum in Xcalak wasn’t always as common as it is today.

In 2015, large amounts of Sargassum started washing in all along the Caribbean coast, and it hasn’t stopped since. Researchers aren’t exactly sure why it started, but theories include warmer water temperatures (hello, climate change) or an increased runoff of fertilizers helping the seaweed grow.

Not only in Xcalak, but all along the Yucatan, Sargassum makes the beach look crappy (especially with trash stuck in it).

As the stranded seaweed starts to stink after a day or two in the sun, most beach accommodations pay to have the Sargassum carted away.

Besides causing these (mostly superficial) human sufferings, the washed-in seaweed makes things difficult for wildlife. In particular, it prevents baby turtles from getting to the ocean after they hatch.

But this stuff isn’t all bad – Sargassum is important for supporting life too. The floating rafts are home to several species of fish (the Sargassum fish lives its whole life in a raft of Sargassum!) and once it washes on shore it becomes food for crabs, birds and other small animals.

If humans or strong waves don’t remove Sargassum from Xcalak’s shore, it eventually gets covered by sand and becomes part of the beach, preventing erosion and providing nutrients to shore plants as it decays.

Click for a complete rundown of the Xcalak Beach

A stay in Xcalak is like a stay anywhere – there’s a lot to like, but you won’t like absolutely everything. Arriving to find Sargassum on the shore in Xcalak is just nature doing its thing.

In fact, if you see Sargassum in Xcalak, relax. It’s a good thing. It means everything’s normal.

Just be prepared to plug your nose as you leave your accommodation to walk up the beach.

Check out what else you’ll find washing into Xcalak’s shore in Yikes! There’s Plastic on the Beach in Xcalak